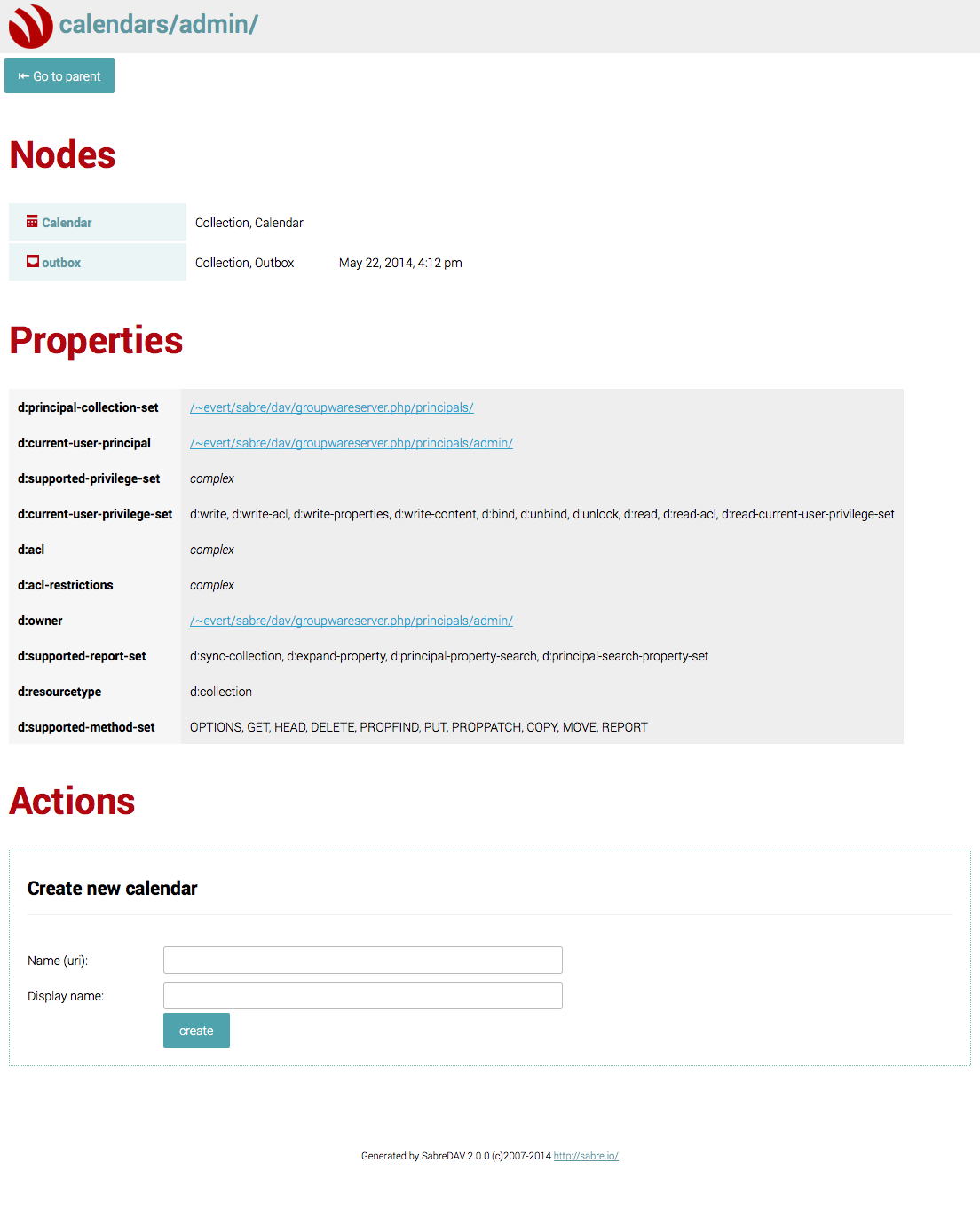 The browser got a big overhaul. It hadn't changed much since when it was introduced in 2009, so a visual refresh was long due.

The new browser plugin shows you a lot more information about webdav properties as well, making it a more useful debugging tool.

A lot of focus has gone into performance, specifically in relation to Cal- and CardDAV. We've been running the bleeding edge sabredav, and we've seen several major cpu drops as we've kept sabredav up to date.

We've optimized queries, and provided new shortcuts in the system that allowed backends to do optimizations that were not possible before.

Support for WebDAV-Sync (rfc6578) has been added. WebDAV-Sync is used by an increasing number of popular Cal- and CardDAV clients. It allows clients to request a list of changes that happened in calendar and/or addressbooks. This can greatly reduce memory, bandwidth and cpu usage on both client and server, and is well worth it.

It's available as a plugin and the appropriate interfaces have been added to add support for WebDAV-Sync to the collections where you want to support it.

Furthermore, both the default Cal- and CardDAV PDO backends have out of the box support.

This is the first sabredav release that ships with sabre/vobject 3.0, and is also the first release that has part of its functionality split out into two new packages: sabre/event and sabre/http.

There's a proprietary protocol that allows calendar clients to sync subscriptions with a server. Support for this has been added to the CalDAV plugin, and is also available in the default PDO backend.

This protocol is at least supported by BusyCal and Apple's iOS and OS X clients.

jCal is an upcoming standard for representing iCalendar objects in json. sabre/dav now live converts back and forward between iCalendar and jCal, and can return jCal everywhere it returns iCalendar.

We highly recommend using jCal over iCalendar. It's a much better format, easier to parse, and likely to use less memory and cpu while parsing.

A big part of DAV protocols is related to storing and retrieving properties on resources such as files and calendars.

The property system got a complete overhaul for this release. This allowed for a great reduction in property-related code and allows for a new feature: storage of arbitrary properties.

The minimum php version of sabre/dav has been increased to PHP 5.4. This was needed for a number of reasons, such as better closure support and traits.

The list of changes is rather massive. Read up on them in the ChangeLog from 1.9.0alpha1 onwards.

As always, the zip can be found on the github releases page, but the recommended installation method is using composer:

A lot of things have changed in this release. If you are running a standard server, it's likely that you only have to run the database upgrade script, but if you did any sort of customizations, chances are that you need to make changes in your code to keep stuff running.

Make a backup. and then head to the migration instructions for 2.0.

This was literally the largest release we've ever done, seeing the biggest diff, most new features, most contributors and longest development time.

Thanks everyone for hanging in there and all your contributions.

I want to specifically thank Markus Staab for tirelessly reviewing every incoming commit, and Dominik Tobschall for all the moral support.